Bicolor cats are everywhere! Tuxedo, harlequin, magpie, and many more cat coats can fall into the bicolor cat pattern category. Let’s dive in!

What is a Bicolor Cat?

Bicolor cats have color “gradations” from minimal white spotting to full white fur coverage. A cat carrying the white spotting gene may actually not express it at all and have full color coverage. However, such a cat would not be considered bicolor and thus is not discussed here.

What Breeds are Bicolor Cats?

Bicolor cat fur is a combination of colorful cat fur with a white spotting gene. It is not associated with any particular breed; many breeds of cat can have a bicolor fur coloration. Mixed breed cats can have bicolored fur as well. There are a few breeds in which a bicolor coat pattern is particularly common.

The Cat Fanciers Association grades bicolor cat coats on a scale of 1 to 10 for white spotting.

Grades 6-10 bicolor cats have a high degree of white spotting, with more than 60% of the fur being white.

Seychellois cats are a unique breed that were created in the 1980s. A breeder bred a Siamese cat with a tortie & white Persian cat, with the goal of creating a breed of cat with an appearance similar to the feral cats on the Seychelle islands. Oriental cats were later bred into the line to result in a slender cat with large ears. Seychellois cats typically come in 3 coat patterns:

Turkish Van cats are a medium-to-long haired breed of cat with splash of color on top of their heads and a colorful tail. Other than these two locations, the cat is all white. The van cat fur pattern is named after this breed. This breed is relatively rare and originates in Turkey.

Piebald is another term for bicolor, particularly when referring to a black and white animal. The word originates from a combination of the words “bald” meaning white, and “magpie”, referring to the black-and-white feathers of a magpie bird. Some call black and white cats “jellicle” cats, referencing T.S. Eliot’s famous poem.

The term piebald is frequently applied to horses, but can also be used to describe cats, bird, snakes, foxes, pigs, and other creatures.

A cat with minimal white spotting will express all colored fur, and a few small spots of white. This spot is called a locket when it’s positioned neatly in the center of the chest. These spots are referred to as button on other areas of the body.

The Cat Fanciers Association does not consider a cat with only a locket of white to meet bicolor standards; however, some may consider this coat pattern to be a bicolor coat pattern.

When a bicolor cat’s white spotting is limited to the face, paws, throat, and chest, this is referred to as a tuxedo pattern in the US. Famous tuxedo cats of lore include Mr. Mistoffelees, the Cat in the Hat, and Sylvester of Looney Tunes fame. When a tuxedo cat has a spot of black in the center of the white patch on his chest, it’s called a bowtie!

Typically we think of tuxedo cats as being black and white, because that fur color combo lends itself to the kitty looking like it’s ready for a fancy dress ball in an actual tuxedo. However, a cat may display a tuxedo pattern with gray or blue fur, brown tabby fur, or ginger tabby fur.

A cat is said to have a mask when colored fur covers her eyes, ears, and the top of her head. It is called a mantle when it appears that a cat is wearing a blanket draped over her torso, with a white tummy and white legs. A cat with both of these features is called a mask & mantle cat.

Harlequins cats and Magpies cats are both names for predominantly white cats with apparently random spots of color. Traditionally, cats that fall into these categories have a high degree of white spotting – that is, more than 60% white fur. Cats with about 50% white spotting but without an identifiable coat pattern are simply referred to as standard bicolor or piebald cats. Harlequin bicolor cats can be any color and white. Magpie cats were originally just black and white, but today the term includes cats in a wide range of colors.

A Moo cat or a Cow cat is a predominantly white cat with any amount of large black spots. This coat pattern resembles a black and white cow. These colloquially terms can encompass cap & saddle cats, mask & mantle cats, and piebald cats. Some black and white Harlequin cats or Magpie cats may also fall into this category. 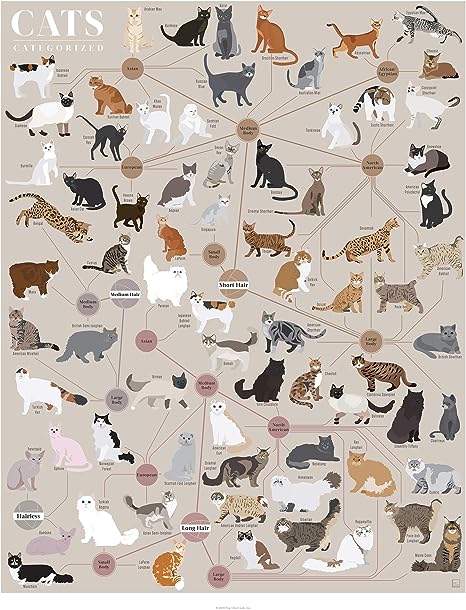 It's hard not to stop and examine the relationships and connections between so many divergent types of cats on this lovely 16" x 24" infographic poster.

Check Current Price
We earn a commission if you make a purchase, at no additional cost to you.

A cat with a van coat pattern has splashes of color between or around its ears, and a colored tail. The rest of a van cat is solid white, or has minimal colored spotting. This fur pattern is named after the Turkish Van breed, though it may be displayed in any number of breeds.

Tortoiseshell cats are a variant of calico cats without any white spotting. They are almost exclusively female cats with any mix of black fur and orange tabby fur. Their fur colors may be thoroughly mixed together, or appear in patches of black and orange tabby. Tortoiseshell cats are not typically placed in the bicolor category because they aren’t a mix of white fur and one other color/pattern. They are a special category of cats with two different colors of fur. Tortoiseshell cats may have minimal white spotting, but a significant amount of white fur will put them in the calico category instead.

Pointed cats are not considered to be bicolor cats due to the genetic differences behind the two coat patterns. A pointed cat’s fur darkens after birth as the cat’s extremities are exposed to cooler temperatures. The degree of fur darkening depends on the cat’s genetics. A bicolor cat’s coat coloration doesn’t change, and is a combination of the white-spotting gene and the other genetics contributing to its colored fur.

Snowshoe cats are a specific breed of cat originating in Philadelphia in the 1960s. Snowshoes are pointed cats that have been bred to incorporate the white spotting gene. These beautiful kitties were named snowshoe cats because the original breeder thought the white pattern on the kittens’ fur make it look as if they had just finished playing in the snow.

Snowshoe cats have darkened “points” – that is, their ears, eyes, cheeks, tail, and sometimes legs are a dark color. They have white spotting forming a diamond shape on their nose covering their mouth. Snowshoe cats also have white mittens on their feet. Their body is a lighted point color, but not white. The white spotting may cover the cats’ tummy.

You may see a cat with a unique, spider-webby appearance similar to a tortoiseshell pattern but with white fur instead of orange. This fur pattern isn’t a bicolor variation, but is due to a condition called vitiligo.

Vitiligo is an autoimmune disease that affects the skin cells of humans, cats, dogs, and other animals. When cats are affected, skin cells slowly lose the ability to produce melanin over time. The affected area may be focal, or it may generalized and spread over the cat’s whole body. The effect of the disease is a slowly-spreading cobwebby appearance on the fur. As a patch-work of skin cells slowly increases in size and density, the cat’s fur will turn from its original color to white over time.

Vitiligo occurs more often in cats at a younger age, and other diseases can contribute to changing fur color especially as a kitty ages.. Be sure to see your vet to verify the cause of any unusual physical changes in your cat.

Tuxedo cats are a type of bicolor cat. Tuxedos are not a specific breed, but rather a coat pattern than can present in a number of different breeds. Cats with a tuxedo cat pattern will have a dark coat color with a white spotting gene that covers a minor or moderate amount of the fur, giving us the brilliant tuxedo coat pattern we love.

How Common are Bicolor Cats?

Bicolor cats are very common. Any cat carrying the White Spotting Gene is likely to express it with some degree of white fur around the cat’s body, resulting in a bicolor coat pattern. Bicolor coat patterns that result from expression of the white spotting gene include tuxedo cats, harlequins cats, magpies, piebalds, moo cats, cats with mittens, and more!

What do you Call a Cat with White Spots?

Cats with small patches of white on an otherwise darker coat may be said to have buttons on his coat. Depending on the location of the white spots, a cat may be said to have a locket or mittens. If the white spots are more extensive, the cat’s bicolor coat might fall into the category of tuxedo cat, mask & mantle cat, cap & saddle cat, harlequin cat, moo cat or cow cat, or even van cat.

Some of our favorite cats are magpie cats, harlequins, tuxedos, and other bicolor cat patterns. The genetics behind the degrees of white spotting and the grades of coloration and white spotting in the bicolor fur create fascinating variation within these coat patterns. Bicolor cats can come from a number of different breeds, and they all enchant us with their beauty!

Everything you Need to Know About Why Cats Yawn

How to Photograph Cats

How to Stop a Kitten from Biting

Why and How to Take Your Cat Outside